Someone once asked me why I travel, why spend money going off to other countries when you can see it all in stunning HD on your television, leaving your sofa only to boil the kettle or grab some more snacks? I can see their point: you may see far more amazing things on National Geographic than if you spend two weeks in the Amazon or Serengeti. But does that really count as experience? I guess it was this comment that inspired this rather ridiculous and quite painful 4 days.

We spent a lot of time on the road rehearsing our answers to the above question. We were even told we should write a book, so I guess we were getting somewhere. No it is not for charity, no we are not training for something, it is a comment on the beige: why sit at home watching TV on your sofa when there is so much out there to experience? When you get back to the office and someone asks what you did over the weekend would you rather discuss the football, the series you watched on a huge television whilst simultaneously tweeting and facebooking from tablet and phone, making sure you never miss a beat of modern life, or would you rather tell the story of how you joined a group of friends, hooked into some seatbelts, and towed your Sofa across southern England? I choose the latter. 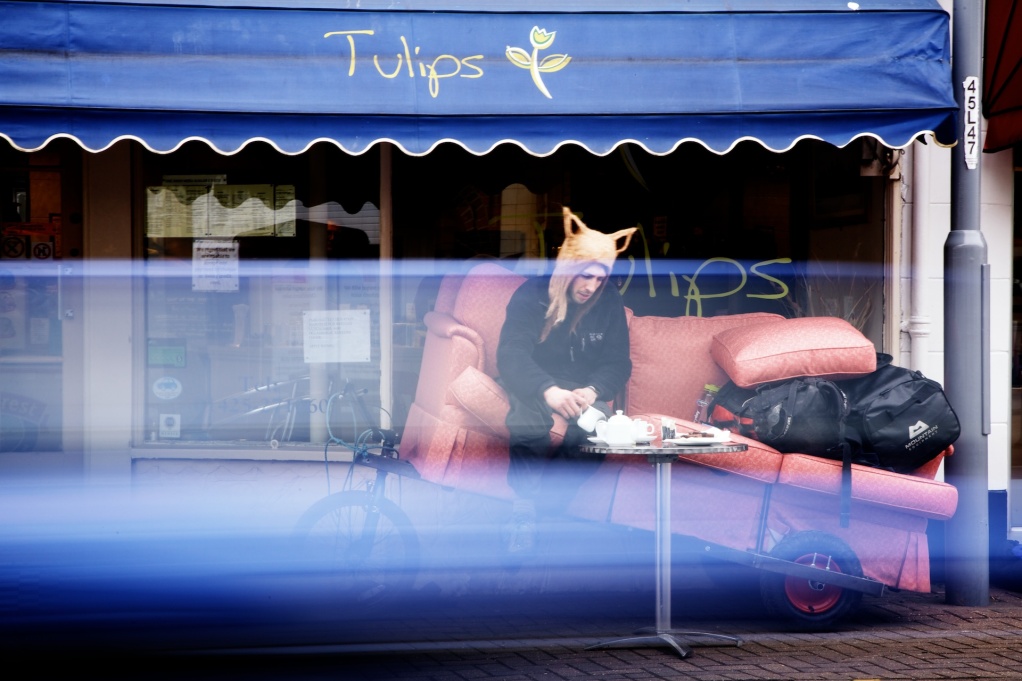 In 4 days’ walking from Bournemouth to Brighton we covered 100 miles with our sofa. Thanks to everyone who came down for the weekend: my blistered feet and sore knees might not have made it to the end without you all – turns out 100 miles is quite a long way!

I have been on a lot of treks and expeditions over the past few years but this was a new experience for me. Not only was it the longest distance I have ever walked, but it was also along tarmac roads. This was great in some ways: instead of huddling under a soggy rock drinking tepid thermos tea, you can simply pull over for a cappuccino and a slice of chocolate cake, actually sit on the thing you are dragging and relax for a while. This had its drawbacks too, the endless possibilities of places to eat, for a start: how to decide? Later in the journey it became worse, having sat down on the sofa it was extremely difficult to get off it again. Jumping off a moving sofa when your legs have seized up…. not a good look! Luckily, someone invented the drive-through!!

A few Tweets I discovered on my return home…. (googling yourself: not a good look either):

“On my way back from the petrol station and nearly run over two boys pulling a sofa along the road.Can this week get any weirder?”

“Just drove past two men dressed as donkeys running along the road dragging a sofa on wheels..what?”

“Walking in the middle of barrack road holding up traffic pulling a sofa, sorry what?”

“Twenty years from now you will be more disappointed by the things you didn’t do than by the ones you did do. So throw off the bowlines, sail away from the safe harbor. Catch the trade winds in your sails. Explore. Dream. Discover.” – Mark Twain

Sofa In The News

Isle Of Wight Radio: Sofa Film To Be Shown At Film Festival